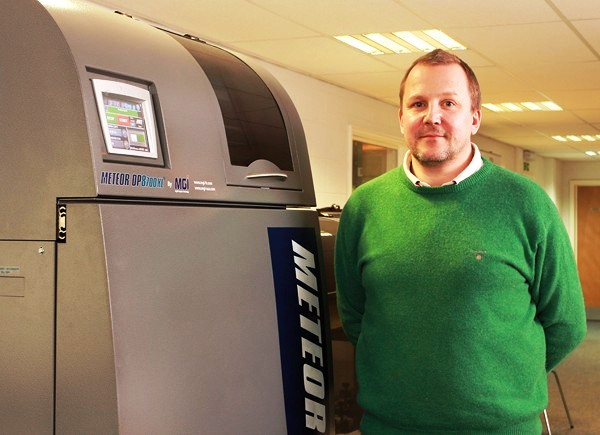 David Arnold of The Langham Press says: “The MGI Meteor offered a different perspective with its unique capabilities. It can print in sheet sizes and formats that were previously only available to us in litho form. Jobs designed to be six-page A4 landscape or eight-page A4 portrait, for example, work well on the Meteor. The machine can also print on to plastic, which again is unusual. This is the sort of capability that could open up new revenue streams for us.”

The Meteor is different from other digital presses: it is built very much like an offset machine with a digital print engine at its heart. One of the main attractions of the unit is its reliability and cost effective method of print production – there are no click charges, but a toner coverage model of charging is used instead. “We have found running costs to be low, especially when compared to paying for clicks. The equipment is very reliable, and we have experienced no major problems since the Meteor was installed,” he says.

The French-built machine is gradually establishing itself in the UK and was supplied via Print and Reprographic Services Ltd (PRS) on behalf of MGI Technology, the front-line importer that has offices and showroom facilities in Hemel Hempstead.

MGI takeover focuses on sector soon to be worth $300bn

MGI takeover focuses on sector soon to be worth $300bn

The Langham Press, a print business based in Foxton, just outside of Cambridge, has installed an MGI Meteor DP8700XL digital press to complement the company's Komori litho equipment.

Me & my... MGI Meteor DP8700 XL By Jenny Roper Thursday, 21 February 2013 Having become a digital printer almost by chance, TG Print has since fully embraced inkjet with the purchase of this flexible workhorse

Converting Today: How have customers in the packaging and converting sector reacted to the launch of the JETvarnish 3D?

Converting Today catches up with Kevin Abergel, director of marketing at MGI. The digital press and finishing manufacturer, which recently made its foray into packaging converting with the launch of its JETvarnish 3D spot coating machine, talks about the companys plans in the sector

Spotting an opportunity: the benefits of digital spot UV in the UK

Benefits of digital spot UV in the UK

Some of the pictures from the Grand Opening and Open Day at Perfect Bindery Solutions where we exhibited the Meteor DP8700 XL.

Rich Pauptit from Flash Reproductions talks about their Meteor DP60 Pro and the new business opportunities it has created.

Rich Pauptit from Flash Reproductions talks about their Meteor DP60 Pro and the new business opportunities it has created.